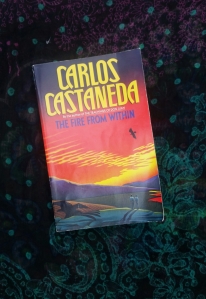 It’s about 10 years since I last read anything by Carlos Castaneda. I always found his books entertaining and insightful, and couldn’t put them down once started. But I moved on to other things and never got back to the series until now. This has been a virtue actually: I don’t think I’d have gotten quite so much out of The Fire from Within had I not reached the point of spiritual development I am at today.

All of Castaneda’s books tell the stories of his apprenticeship with Yacqui Indian Sorcerer Don Juan Matus. I use the word sorcerer here, but it might be more appropriate to say he is a shaman, a spiritual teacher or a master of awareness. He teaches Castaneda to see that everything he considers to be real is based upon just one possible configuration of human perception. There are many, many other possibilities out there, and by accessing other ways of seeing we can reach new understandings and make some incredible achievements.

‘What we perceive is not a fact of some kind, because we learn what to perceive.’

There are mixed opinions from Castaneda’s readership about whether the books are fictional, true accounts, or somewhere in between. No one knows for sure whether Don Juan Matus ever existed. Personally I think it is unimportant because the teachings have value either way, but I wouldn’t be at all surprised if Don Juan turned out to be Castaneda’s inner guide; a spiritual self he was able to communicate with.

The Fire from Within deals with some complex ideas of heightened awareness and the true place of rationality and emotion. But it is done in such a gentle way that the subject does not seem heavy at all. Castaneda asks the questions we all want to know about Don Juan’s teachings. He is constantly requesting further explanations, clarifications and rephrasing from his teacher so that we are given a complete layman’s view of the concepts discussed.

Upon first reading, the content of this book may seem very farfetched. There is talk of shapeshifting, being in two places at once, escaping death, undead beings, and ghostly companions from other realities. But being a practitioner of raja yoga, and having recently read books such as Psychology and Alchemy by CG Jung, Israel Regardie, and The Secret of the Golden Flower, the explanations and methods are surprisingly plausible to me. Not everything is to be taken literally of course. Much of what Don Juan has to impart are convenient metaphors for mental states, and some of the terminology is there simply for consistency and visualisation purposes.

‘To reason it out is not to verify it. Conclusions arrived at by reason have very little or no influence in altering the course of our lives. Hence, the countless examples of people who have the clearest convictions and yet act diametrically against them time and time again; and have as the only explanation for their behaviour the idea that to err is human.’

The fact that bizarre happenings are presented in such a straight forward and believable manner makes The Fire from Within terrifying in parts. The idea of pulling beings from ‘the other side’ into our reality through a mirror, and the ghosts of past seers (who buried themselves alive) coming back to steal our energy, is quite haunting.

This is a book that I found myself making notes throughout. It contains so many quotes that gave me deep-seated realisations, that I will go back to time and time again to aid understanding of my spiritual path. But the greatness of this book is that you don’t even need to be on a spiritual path to take enjoyment from it. The characters are likeable and intriguing, the more outlandish teachings are fantastical to read about, and the more ordinary teachings are thought-provoking for anyone. For example there is a whole chapter about ‘the petty tyrant’ and how best to deal with the people in life that annoy us no end.

Other concepts discussed include the differences between the known, the unknown and the unknowable, insights into lucid dreaming and ‘big’ dreams, the will to live and the will to die, tantra, and visions of God. Much of this was of great benefit to me understanding some experiences I have had with meditative and dream journeys over the years, and I intend to write a separate piece on some of the specifics.

I highly recommend this book, but the only thing I would suggest is to perhaps read some of Castaneda’s earlier work first for a grounding in some of the terminology. There is a loose order to the books, and this one is pretty far into Castaneda’s quest for knowledge and right at the end of his apprenticeship with Don Juan. The very first book is ‘The Teachings of Don Juan’. I am very pleased to rate two books in a row as 10/10. I have chosen well lately.

3 thoughts on “The Fire from Within – Carlos Castaneda”