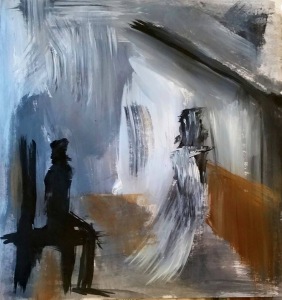 There used to be a forgotten place where I could go to paint. The narrow, graffitied entrance was right beside a bookshop on a busy street, and led to a lift. The old gates screeched as I pulled them across, and travelling up in such a temperamental contraption in near darkness gave me the chills. At the top I would leave the gates open to prevent anyone from following, knowing fine well the only other way in or out was through the fire escape.

Up there it was like a home that had been left for nature to take. The door frames and bare floorboards were rotting, there was only natural light streaming through the tiny barred windows for all electrical fittings had been removed, and there was dust upon the dust. I would carry my bundle of sheets, my easel and my satchel of paints down the musty corridor and choose one of the rooms in which to take up residence for a few hours.

I was stuck in a melancholic depression in those days, and I somehow felt at home among the dilapidation. Being away from people and noise and brightness and commerce felt like a blessing. It took me to the oldest part of my soul, where I could directly experience my personal myth and boundless unconscious. I was free to express whatever I needed. I could throw paint around, I could meditate, I could make myself bleed, I could cry the truest of tears. I could be what I was when there was no one around, without being coloured by them. Without having their circles of influence and perception overlap with mine.

I stayed there just once overnight, with a sleeping bag and a candle-lit pumpkin in the autumn. In the unrivalled quietude I was haunted by the depth of emotion I had experienced during the day; it saturated my heart and soul. I stared into my painting and I saw in it something familiar, like a memory that had been long forgotten and suddenly come flooding back; a deep-seated memory that was ages older than me. I realised in that moment how small and insignificant I was as an individual; how humanity had been experiencing this memory beneath the surface for thousands of years.

Something indigo and covered with stars was coming through the broken ceiling. I felt ancient and wise and immaterial and filled with fear and love all at once. I felt so at home it scared me. I was removed from it all, I was free.

But I knew even then that I couldn’t stay in her arms, for then there would be no more paintings. I was addicted to the process, and I wasn’t ready to abandon that flow for anything.

But one day, when I’m done.

I know what awaits me in that forgotten place.

Fragments of Light is a hand-bound, illustrated zine compiling short bursts of creative writing about magick and madness.

3 thoughts on “Fragments of Light: A Forgotten Place”