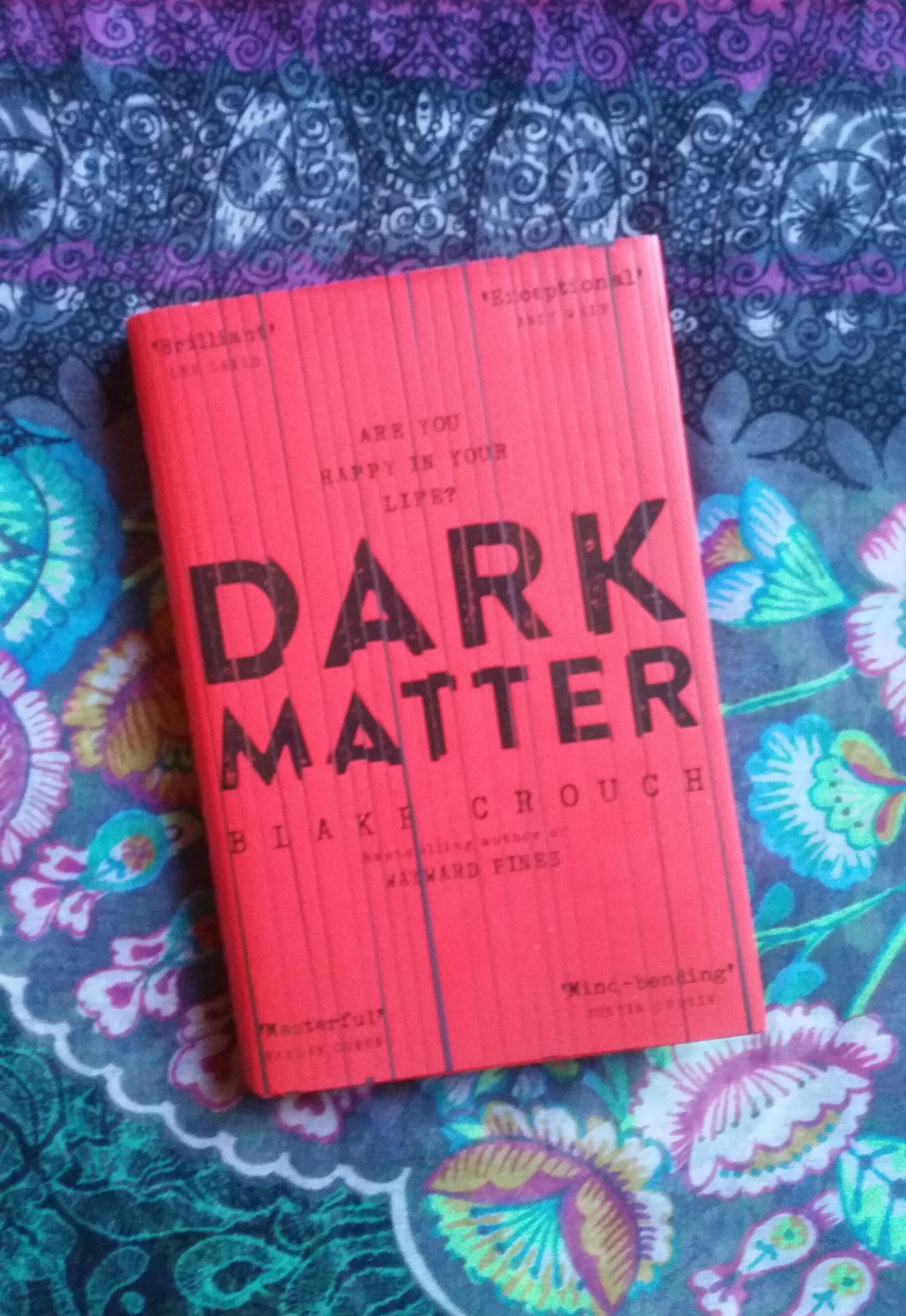 ‘We all live day to day completely oblivious to the fact that we’re part of a much larger and stranger reality than we can possibly imagine.’

Dark Matter has been getting a lot of positive attention lately, and I picked it up after seeing a couple of good reviews on other blogs I follow. It is a science fiction thriller about the nature of love, regret and our concept of reality. I’m always attracted to books that take on the idea of the multiverse, quantum realities, and the Schrodinger effect (though it is difficult to do well), so I was looking forward to this.

This is quite a difficult book to review or even describe without giving spoilers. I bought it based on little more than the description I have given above, and even the information on the inside cover gave me more of a clue to what was going on than I’d have liked.

Very basically, the protagonist Jason is knocked unconscious by a masked kidnapper, and the world he wakes up in is not his own. People and places he recognises are there but they are not the same, and there are high expectations upon him to be someone he doesn’t know how to be. He has to figure out what has happened and how to get back to his family. It is the search for a grain of sand on an infinite beach.

I had an unusual experience with this book. I had quickly guessed the nature of the first ‘twist’, and 25% in I was worried that the whole novel would be building up to that revelation. I found the writing style a bit shallow: the sentence structures are repetitive and the descriptions are basic. But it was very fast paced, and I wanted it to prove me wrong so I kept reading. 50% in, thankfully Jason knew what I knew. The adventure was starting to pick up. But still I felt I knew where it was heading, and that the rest of the book would likely be reasonably straight forward problem resolution. At 75%, there was a twist I hadn’t seen coming and that exhilarated me. A new level of chaos so late on in the book that made me feel lost: how on earth would he resolve his problem now?!

I often have a feeling for how much I’m going to enjoy a book after one reading session. But this one started out feeling like a 5 or 6 rating, went up to a 7, then an 8. And now I’ve had some time to reflect on it, back to a 7.

There are some big philosophical and moral issues faced by the main character, but they just weren’t dealt with in the depth I would have liked. This is forgivable given the pace of the action: the characters wouldn’t always have chance to be pondering the big questions when they were so vulnerable and desperate. Nevertheless, I felt some of the reactions were unrealistically accepting of a bizarre situation, and some of the problems along the way we’re resolved in unsatisfactory ways. There were opportunities to make this really mind-bending, but instead it went down the route of predictability. I also thought the flow of the story would have benefited from slowing the pace down from time to time, creating richer imagery and soul, but that may just be my personal preference.

That may seem like a lot of criticism, but I did enjoy Dark Matter in the end, and it does do a good job of making a potentially complex theory into accessible entertainment. It is not a difficult read; it is cinematic, and it is, at its base, a love story. It just might be a bit tame for seasoned science fiction fans.