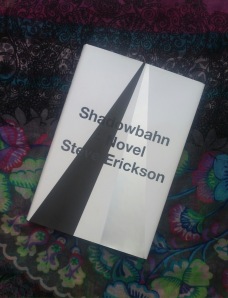 Twenty years after their collapse, the Twin Towers mysteriously reappear in the Badlands. Thousands gather to witness the sight, describing them as an American Stonehenge. What make this even more strange – and haunting too – is that music comes out of the buildings that no one can quite place, and is experienced slightly differently by everyone present.

‘Which ghosts are being summoned is unclear: the spirits of the Towers? Or the phantoms of the Badlands? Or do, within the buildings, the spirits of two decades previous meet the phantoms of more than a century past, and do they embrace in spectral communion, swap tales of their lives, commiserate and comfort each other over their deaths, display for each other photos and engravings of wives and husbands and children, some wrapped in animal skins and blankets and others donning Mets caps and The Blueprint sweatshirts?’

This event is the ‘landmark’ of the novel, and the blurb. But in itself, it isn’t really what the story is about. As I read it, the story is about the road not taken. Every person, event, and creation has a twin: a shadow which is essentially made of the same principle but has different situational factors acting upon it. Shadowbahn bravely explores this idea on multiple layers.

When the towers reappear they are empty but for one man: Jesse, Elvis Presley’s stillborn twin brother. He comes from a shadow-reality in which he was born instead, but is tormented by a song in his head that he can’t sing, and an idea of an extraordinary life that he isn’t good enough to lead. It is metaphorical, I think, for the way America feels after the disaster that struck in 2001. It is in the shadow of what went before; changed forever and unable to live up to its own expectations of what it means to be great. It has a song in its head that it can’t reproduce.

‘Even as the body ages, the psyche settles into whatever was your best moment, the moment when you most came into your own and fulfilled your clearest sense of who you are, when everything about you fell into the best alignment it will ever know. Maybe it’s the same for a country, its psyche clinging to whenever was fulfilled its clearest sense of itself.’

This thread of story also had me thinking about how it is the times that make the icons, and the standards that they must perform to; not only the greatness of the individuals themselves. Had Elvis Presley been born into 19th Century London for example, he would not have had the same achievements. We are in an endless dance with circumstance.

Another aspect to the novel is the story of brother and sister Parker and Zema, who we met in Erickson’s previous book These Dreams of You. They are one another’s shadow: male and female, white and black, native and immigrant. They are on a road trip to visit their Mum, but take a detour to visit the towers in the Badlands. They are listening to one of the playlists their Dad made before he died: twin playlists, in which each song had its opposite. He believed that their twin being present made something new and whole out of the music, like a key to unlock something within people’s souls. The music coming from their car is for a while the only music left, which I took to be a nod to ‘the day the music died’.

Even the pages of this book are laid out as sets of two, with each having a heading or a bold first few words to emphasise this. It is a nice touch and also speeds up the pace of reading.

The story is all linked together by music, as if to say that is what the spirit of America really is. Music has a way of getting into each person in a wholly different way. Everyone who has heard a song will carry it around in connection with a different set of memories and associations, and yet it is an experience to share, to pull people together.

‘As pictures pin the maps of our lives, music marks the calendar.’

There is something ethereal about the way Erickson uses music to bind the times of events and the coordinates of his characters, that creates extra dimensions to the text as though from nowhere. Even being a fan of his other books, I didn’t see it building up in the background right from the beginning, then all of a sudden it hit me that he had taken me somewhere deep. I found myself with a huge grin on my face, looking through all the gems on a frequency I was suddenly picking up. I guess that is what the author means when he says he likes to write ‘big books disguised as small books’, which is an admirable feat.

Having said all of that, Shadowbahn is not my favourite of Erickson’s novels. What took away some enjoyment for me was that there was so much mention of specific songs I don’t know, and I felt I was missing out on aspects of the story because of it. Also as I am not American, I wonder if perhaps it would’ve had a greater impact on me had I known more about the country’s history and had direct experience of the way its society has changed in recent times. I was glad to see it wasn’t all politics though, and there is certainly a lot to be gotten out of reading Shadowbahn on a personal level too.

If you like the sound of this book, you might also be interested to read my previous post Homage to Steve Erickson in which I talk a little bit about his previous novels and why he is my favourite contemporary author.