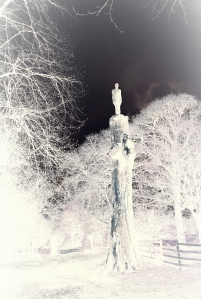 She lies on her bed thinking of him and what they could have been. He was cruel to her, she knows, but she admires the reason why. She longs to tell him that the life he chose was what she wanted all along; to be released from norms and social expectations, to roam as free as a bird with no connections and only the present moment to worry about. He was no good for her, he had said, he would lead her astray. But she wanted to be led astray. She wanted the excuse to experience colour and exhilaration instead of greyish and uniform. Take me with you, she had begged, I understand, I do.

He rides faster and faster on his bike, thrilled by the roar of the engine beneath him and the sensation that everything is moving quickly through him. It takes the pain away. Pain can’t travel at 100mph like he can. If he were to slow down he’d be stuck with that thought yet again, that she is only ‘the one that got away’ because he pushed her. He longs to tell her that the life she chose was what he wanted all along; to be accepted by society, to settle in one place long enough to establish a true sense of self, to have a past and a future worth caring about.

In their separate dreams she and he will live, building new castles from the ghosts that haunt them, their silent screams resonating until the end when the tide catches up and takes them both for its own.