“Just because you remember it doesn’t mean it happened.”

In this fast-paced sci-fi novel, David Sparks wakes up in a terrifying future. Surveillance, augmented humans and a damaged environment are the norm, though David has no idea how he came to be amongst it. His stream of consciousness is interlaced with memories of an ordinary family life some 100 years earlier, and the drive to keep turning the pages comes from the question: who is David S. Sparks and what is his reality?

This book is full of imaginative technology that gives a varied and colourful illustration of a possible future. It is exciting, action-packed, and potentially divisive. But, like all good sci-fi, it also comes with a warning as to where our obsession with cutting-edge tech and playing God may land us. 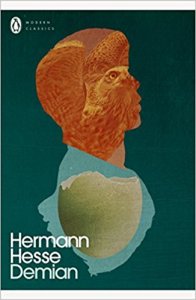 “If you hate a person, you hate something in him that is part of yourself. What isn’t part of ourselves doesn’t disturb us.”

Demian is one of Herman Hesse’s shorter works, and his most Jungian. It is a coming of age story, about the inner world of the protagonist, Emil, as he learns morality, emotional strength, and independence. In a constant juxtaposition of light and darkness, Hesse skilfully represents Jung’s ideas about synchronicity, the shadow, the anima, and how we can grow through ‘conversation’ with them. I found it to be profound for such a simple story, and highly relatable; such is Hesse’s talent. 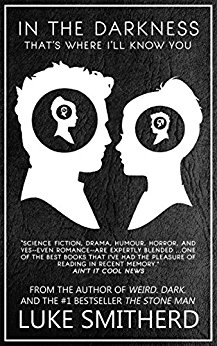 In The Darkness, That’s Where I’ll know You: The Complete Black Room Story by Luke Smitherd

“There are hangovers, there are bad hangovers, and then there’s waking up inside someone else’s head.”

After taking ketamine on a night out, Charlie Wilkes wakes up inside Minnie Cooper’s head. It’s as bizarre as it sounds, and yes, that’s her real name. First he has to win her trust by convincing her she isn’t going insane, and then they have to work together to solve a murder that spans dimensions.

This is the most gripping, well written new novel I’ve read in ages. It has many twists and turns; just as soon as I thought I’d got my bearings, another complication was thrown into the mix. It is a quirky love story, a thriller, a mystery, a psychedelic sci-fi, and a comedy. Anyone who reads this blog regularly will know that the books I love always have a deeper layer or philosophical idea to them, and The Black Room Story has that too. I can’t wait to read more from this author.

You Should Come With Me Now by M. John Harrison

“You think you see the real world, but you don’t.”

Cited as one of the pioneers of weird fiction, M. John Harrison tells surreal tales that make the reader feel uneasy, intrigued, and surprised. This is a collection of his short stories, which are of varying length but all connected by the theme of ghosts. This theme, which isn’t made explicit on the cover or blurb, is a key to interpreting the stories.

As with most short story collections, I like some more than others. They are all written with admirable prose, but I wouldn’t say the stories were of consistently high quality. The ones I did enjoy will stay with me for some time to come.

The only non-fiction book for this post, Otherworlds is a mixture of anecdotal essays and research reviews on the topic of psychedelic consciousness.

There are some fascinating ideas discussed here, including the links between psychedelic experiences and shamanism, tribal incorporation, dreaming, panpsychism, archetypes, and psychotic delusion. In particular, Luke draws attention to the hints psychedelic use can give towards the nature of ESP and a belief in the supernatural.

Research conducted in these areas is very difficult to test objectively, as the author himself admits. Apart from needing strict government approval, the very nature of the experience involves a great many subjective factors that can’t be monitored or isolated under scientific control. As a result, most of the experiments discussed here have been largely inconclusive.

The most interesting section of the book was, for me, the discussion on objective elements of psychedelic experience and how they link to the idea of a collective consciousness and underlying myths around the world. For example, the recurring vision of a serpent-like beast with near infinite eyes that seems to be a guardian of souls… Now that will surely be making an appearance in future stories!

What unfortunately lets the book down is the formatting and constant use of brackets to refer to citations, years and statistics. It may seem a small thing, but it makes for a very broken reading experience and turns intriguing topics dry. There are also parts that go into great detail on things like doses and percentages, where a chart would have been clearer and a summary just as insightful. However, I will without a doubt be returning to parts of this book for reference in future.

Do any of these take your fancy? Do you have any recommendations for me? If you enjoy my reviews, be sure to hit ‘follow’ to have them delivered straight to your inbox. If you don’t have a WordPress account, you can still do this by entering your email address.

If you enjoy metaphysical and sci-fi books, you might be interested in my short story collection, Fragments of Perception. Click here for the blurb and where to get your copy.