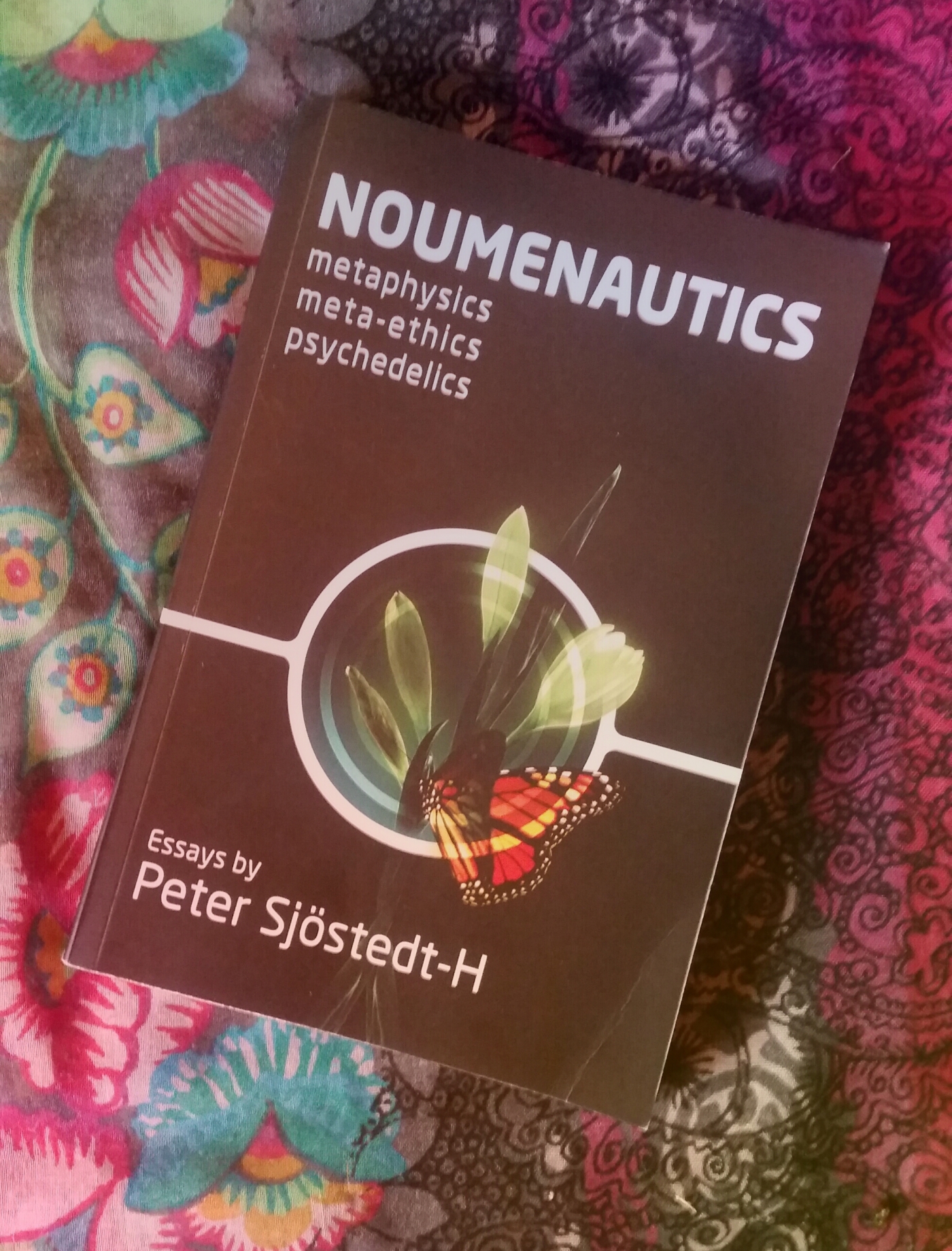 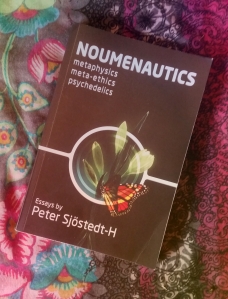 ‘One might say that the noumenaut is a philosophical psychonaut – one who navigates through both the human harbour of ideas and out through to the inhuman ocean that is psychedelic consciousness.’

When I saw the subject matter of this collection of essays, I couldn’t wait to read it: so I was thrilled to be sent a free copy in exchange for an honest review. Although it took me a while to read, this was only due to the fact I kept stopping to make notes and contemplate, so it’s safe to say I was not disappointed.

Like most books with a philosophical bent, there is a lot packed into Noumenautics’ 136 pages. It starts out with a discussion on psychedelic phenomena: what the experience of using psychedelics does to our sense of reality and physics, and how we can apply the knowledge gained from it in rational, philosophical thought. It is an area that is surprisingly omitted from most popular notions of philosophy – which may have more to do with our prescribed morality (a topic also covered in the book) than a lack of validity – so I found it fascinating. I am a fan of Aldous Huxley’s book The Doors of Perception, and this reads well as a scrutinising companion.

‘To deny philosophers of mind psychedelic substances is tantamount to denying instruments to musicians.’

This leads naturally into an interesting exposure of Nietzsche’s little-documented relationship with psychedelics and pharmaceutical drugs, and demonstrates their double-edged nature when used as mind-expanding tools.

Psychedelics are not the only topic covered in Noumenautics, but their in-depth exploration early on in the book sets a tone for the other essays. The author uses his conclusions on the existence of psychedelic phenomena to reframe other, better known ideas, such as the human will, power, and morality.

The essay entitled ‘Vertexes of Sentience’ was hugely inspiring for me, particularly as I was not previously familiar with Alfred North Whitehead, whose ideas are the focal point. The concept of ‘eternal objects’ is explained well, along with the way they appear to interact with, and ingress into, actual entities. It made me think deeply about the way our choices and achievements may both affect, and be affected by, a universal consciousness, and the way the human ‘toolkit’ interprets that to give our version of reality.

‘A spiritual experience must still be interpreted, and the tools used for interpretation are significantly cultural.’

I won’t pretend there isn’t an element of confirmation bias involved in my enjoyment here. The author skilfully explains metaphysical concepts I have only attempted to describe through the medium of storytelling, such as the ‘pure potentials of the universe’ as distinct from actuality, reconnecting to the fluidity beneath layers of social conditioning, and the practical difference between experiencing something mentally and physically carrying out the action.

‘What is the difference between dreaming that one met God, and actually meeting God?’

This last item is of particular to interest to me right now, as I am researching the effects of virtual reality on empathy and mental health for my next book; I’ll definitely be revisiting some of Noumenautics to help with this project.

My favourite essay in the book, though, was ‘Neo-Nihilism: The Philosophy of Power’. It was a real eye-opener so far as the root of our morality is concerned, and argued well the case for nihilism being a sensible perspective.

‘In the West, we think we have ‘progressed’ morally from the former, less moral times. But this is false; we have simple changed: moral progress and retrogressive are illusions. In this sense, morality is more akin to fashion than to technology.’

The reader is forced to question the way we think about other cultures with different values to our own, the way we make and keep our systems of law, and what constitutes desirable (as opposed to correct) behaviour. Contemplating the unwritten contract of being a ‘good citizen’ brought to mind a whole train of thought about AI for me, which will surely appear in a story somewhere along the line, and the notion of unusual values and points of reference is a topic I have already attempted to bring into the ‘Void’ series.

‘To differ greatly from the average man is not wrong or immoral, simply different.’

Which brings me to perhaps my favourite quote from the book:

In general, some great points are made in pondering the philosophical basis of will, which is of particular personal interest for application to the ‘true will’ concept in Thelema. The book also deepened my understanding of what Schopenhauer meant by will, his viewpoint on it leading to suffering, and the way that led into Nietszche’s idea of ‘will to power’.

The language used throughout the book may be considered difficult to follow for anyone not used to reading philosophical works, but it is not impenetrable; it just requires some focused reading time to fully absorb the ideas. In fact, it gives a very good overview of the key ideas of several famous thinkers, and for that alone it is worth a read for anyone with an interest in the subject.

There were a couple of essays I didn’t enjoy so much, but mainly because they felt like repetitions of views expressed better elsewhere in the book. However, on the whole, I have come away with such enriched ideas that have instantly inspired and enthused me, and that is above all what I look for in a book. Highly recommended.